This year (2017) the planet Saturn passes over the Galactic Center — an extraordinarily potent source of energy, spirit, inspiration, and transformational radiance.   This is a once-in-twenty-eight-years opportunity to consciously ‘ground’ the energies we receive from the Galactic Center (GC) in constructive, practical disciplines and applications to transform and upgrade our beings, consciousness and co-creations together. 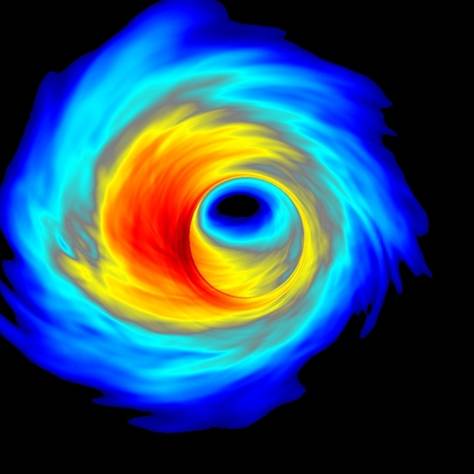 A black hole. It is now known that a gigantic black hole exists at the center of our galaxy, containing the mass of four million of our Suns.

The Galactic Center activates Kundalini energy in all beings, amplifying its natural functions of alchemical purging, purifying, quickening, transmuting, awakening, and liberation among us.  One of the best ways to consciously work with this extraordinary energy is to receptively meditate while seated outside on the ground, so your tail bone is  connected with the Earth, while the Galactic Center is directly overhead, beneath your location, or on the horizon (on one of the four angles of an astrology chart for the time and place).  In this position, your spine and nervous system become a conduit for the potent energies that activate, boost, and augment your soul-healing, body healing, consciousness raising, natural innate master integration process.

Symptoms of Kundalini activation may include accelerated heartbeat, tingling, buzzing vibration or fluttering in an ear, sudden and intense purging (sudden, urgent need to go to the bathroom, and simultaneous enhanced detox), heating-up or sweating, a feeling of acceleration/ speeding-up, vibration; and a natural swaying motion from side to side, or forward and back that feels really good, when your attention is not focused in the higher chakras.  Spontaneous glossalalia sometimes occurs as a Kundalini inner-healing/ attuning/integration process via sound. Flashes of insight and heightened senses may occur, and a deep, profound state of happiness, affirmation and well being.

The Galactic Center as seen by X-ray emissions.

The Galactic Center is located at 26-28° of Sagittarius, currently calculated to be centered at 27° Sagittarius 04′.  The Cognitive Sciences Laboratory in Palo Alto, California tested thousands of ESP (extra sensory perception) practitioners and concluded that their accuracy increased in relation to their physical proximity on Earth, to the GC.

In 1931 Karl Jansky of the Bell Telephone Laboratories was carrying out experiments with an advanced radio antenna to track down all the noise sources causing problems for the newly developed shortwave radio telephone systems. One perplexing source of radio static could not be explained… until Jansky made a key observation. The static would steadily peak four minutes earlier day after day. The unknown radio source was keeping perfect time not with some daily occurrence on Earth, but with the passage of the stars overhead, reaching a maximum every 23 hours 56 minutes, once every sidereal day. What Jansky was measuring turned out not to be coming from the Earth; it was radio emission from the center of the Milky Way galaxy passing overhead every 23 hours and 56 minutes. His observation of a precise correlation between sidereal (star) time and his mystery source gave birth to radio astronomy. Hubble photo of the Galactic Center.

Facts about the Milky Way Galaxy:

Saturn is conjunct (together with) the Galactic Center within two degrees mid-February and early June of this year (2017), while in closing Square to Chiron.  Saturn turns retrograde on April 6 at 27° Sagittarius.   Saturn’s forward motion alignment with the Galactic center repeats between November 6 and December 13, 2017.

The transits (planetary alignment activations of the GC) listed below mark times when we can especially apply personal will and focus, to harmonize and align with the Pillars of our Universe, and do our part in Standing to bridge Earth and Heaven for the sake of all beings in these critical times.  Of course we can do this any time with intention, but such engagement is enhanced during the days and times below: 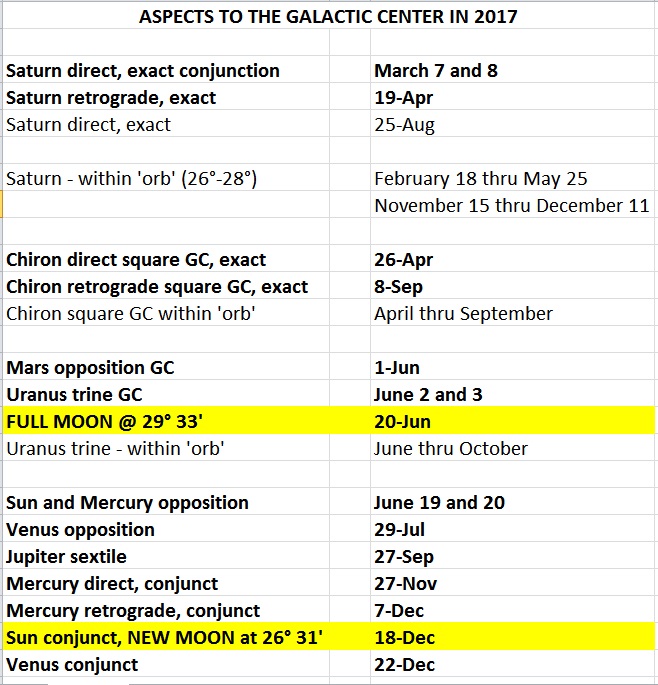 The point in space called ‘Black Moon Lilith’ will conjunct the GC in October.