Our momentous solar eclipse on August 21, 2017 marked the beginning of tectonic changes for America.  Energies initiated by that great event are now filtering down through the ‘Time Lords’, or planetary authorities, through their seasons, triggers, and periodic activations, and can manifest up to two years after the eclipse event.  Astrologers have observed that some of the most potent effects occur within one month following the eclipse date.  I will be tracking some of the most obvious affects on this page, as they occur, and as my time permits.

Here is the astrocartography map for the United States with lines marking where the eclipse and the planets were angular (rising, descending, on the midheaven, or nadir) for the time the total eclipse was exact on August 21, 2017.  These lines mark areas of effect, colored by the energies associated with each heavenly body. 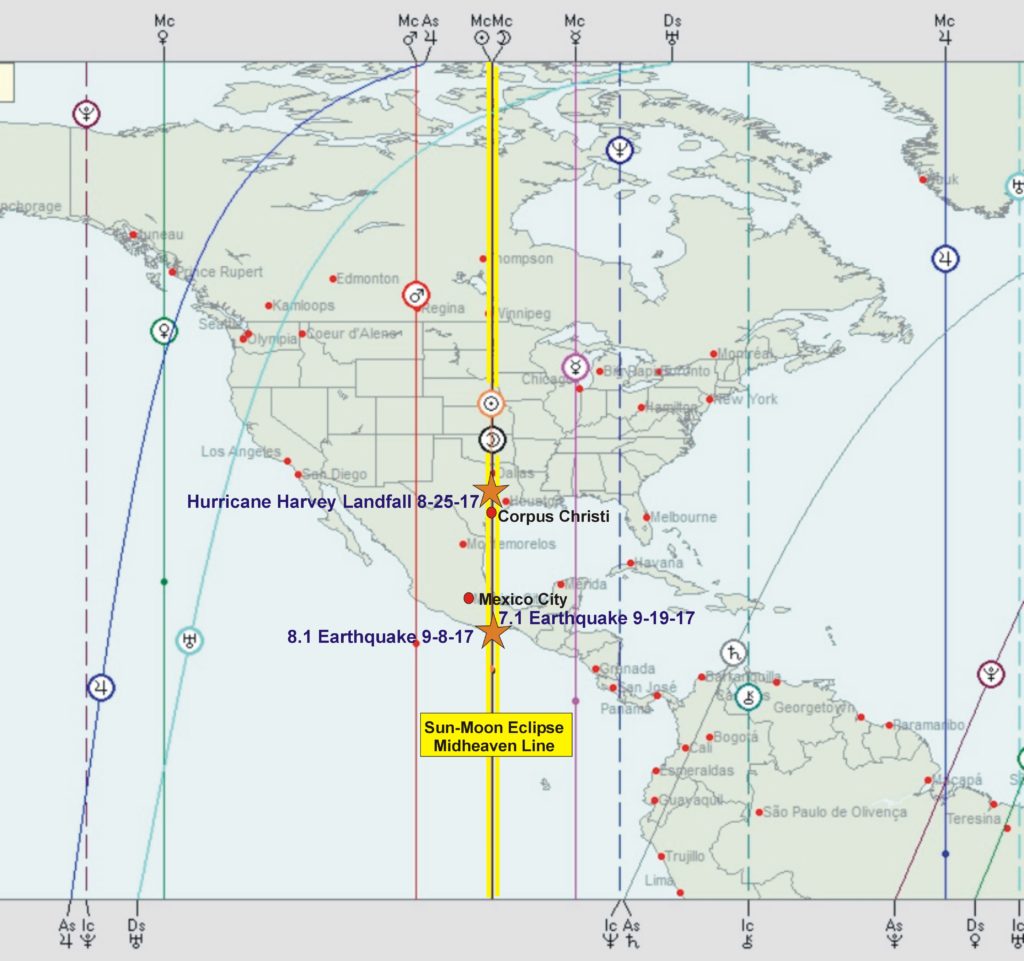 9-11-17:   Since the Great American Total Solar Eclipse Occurred on August 21st, 2016 the Global Crisis – as forecast – is accelerating and intensifying.   The Mundane Effect of the Eclipse on the World stage will be effective for the next 11 months.

9-6-17  –  The Sun emits X-class flares, one is the largest in 10+ years.  Sun Unleashes Monster Flare …  Leo is the sign of the Sun, traditionally ruled by the Sun in astrology, and well situated for power in its own sign.  It’s natural that this eclipse would presage extra attention to the Sun, big news about the Sun, and growing awareness of its effects on our lives and weather.

Many of our best scientists and astrometeorologists are telling us that we are now moving into Global Cooling because of a potent cycle of change associated with solar activity, called a Grand Minima.   This is NOT the normal  11-year cycle of lower activity, it’s a cycle of especially low activity with the potential to create a mini ice age due to cosmic rays penetrating our living space, producing low level cloud cover and many other environment-changing effects.  This new cyclic low, bringing colder temperatures, increasing storms severity, flooding and heavy snows, is slated to begin December 2017 when Saturn enters Capricorn, and continue for several years.

This unusual juxtaposition of a waning solar radiation cycle with an intense solar flare and coronal mass ejection (CME) marks the intensification of polarities in our times.  These energies can be used for growth, change, breakthroughs, and potent creativity, or they can be squandered in useless conflicts, divisions, pettiness, and complaints.

As mentioned in my article about this ‘Great American Solar Eclipse’, wonders in the sky are more frequent and awesome now, an effect described by Uranus’ situation in the eclipse astrology chart. 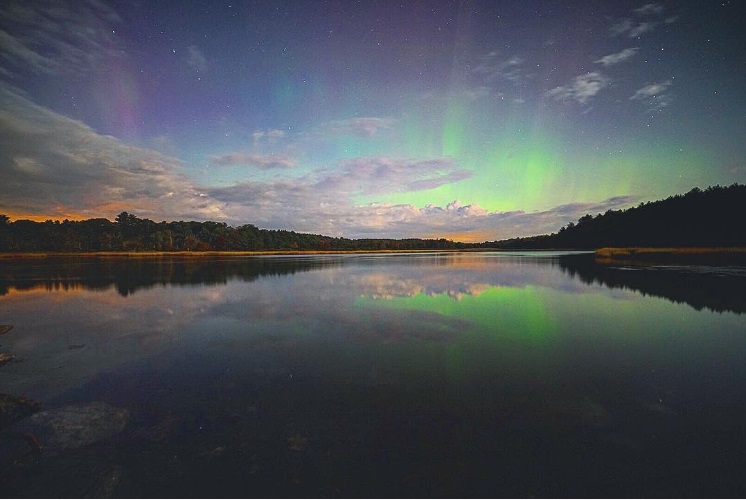 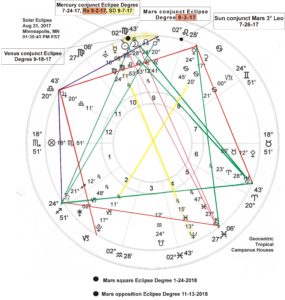 8-25-17 – Hurricane Harvey bears down on Corpus Christi.  The Sun-Moon Eclipse (8-21-17) Midheaven line on the astrocartography map runs right through Corpus Christi, marking an area where Hurricane Harvey eventually made landfall on August 27-29; causing great destruction that will require lots of money, labor, and time to rebuild.  This was the first major hurricane to hit the Texas coast since 2008. 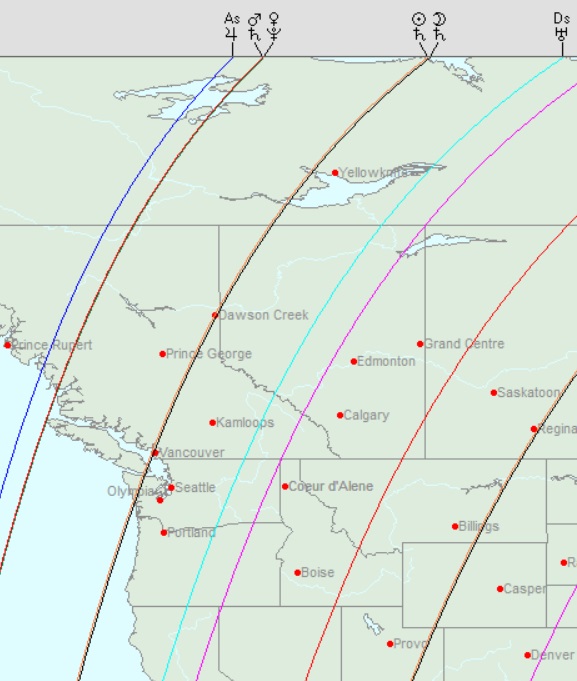 8/24/17  –  Farmed Salmon Escape into Washington Waters.  This is a direct result of the eclipse syzygy creating ‘exceptionally high tides and currents’ which ruptured containment pens (or such was the excuse of the farm company, powerful eclipses produce stronger tides on a regular basis).  The article states, “A fish-farm spill occurred Saturday off Cypress Island when anchor lines on a commercial net pen with more than 300,000 salmon gave way, allowing thousands of the 10-pound, farm-raised Atlantics to escape and, officials fear, mix with the wild Pacific salmon.”  This will intensively exacerbate problems with the native Chinook Salmon which are already under heavy survival stresses.

The astrocartography map for the eclipse reveals that the Sun-Moon Eclipse/Saturn MIDPOINT line runs right through the area, indicating a locality where the energies physically ‘ground.’ 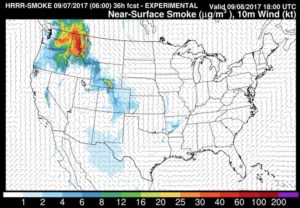 Fires in the Northwest and Northern California (ongoing) flared up immediately after the Solar Eclipse and have been burning out of control in several areas.  if we compare this map to the astrocartography map of the eclipse above, we see that the Uranus line is near and passes through some of these areas.  Uranus is currently in the last five degrees of Aries, ruled by Mars, sparking hot, fiery energy marked by that line.

Undoubtedly this intense energy will manifest in other ways also over the next year.