On Indigenous and Surrogate Power, by Glenda Green

Glenda:  “You have made it clear that Love is the power of the Universe, and now you have stated that the Sacred Heart is the center of power given to humanity.  With such a positive foundation, why then is power such a difficult and corrupting problem for our planet?”

—  “The problem exists not with power, but with surrogate power!”

Glenda:  “What is surrogate power?”

—  …. ”True power resides with God, and it is indigenous thereto.  Through enduring connections with the Creator, that power is transmitted to individual beings and all living things, to be held indigenously within each life.  Such power can be lost or corrupted only through denials of love and separateness from God, because all power from God is essentially pure.  Man delegates surrogate power to structure, authority, and forces external to himself.  Surrogate power can extend man’s influence over the environment.  However, when delegated power assumes the rights of indigenous power, it corrupts very quickly.  For example, when two men form a business together, they create a surrogate power.  if it is understood as such and supervised equally by both, the structure they created can be useful.  If one man should usurp the other and assume the delegated power only for himself, it will surely corrupt.  Education of children is a surrogate power, delegated by their parents.  As long as it reflects the values and wishes of the parents, that power is held in proper custody.  Should it be used to undermine the indigenous power that exists between parents and children, there will be problems.  A government is surrogate power, delegated by the governed.  As long as it serves the needs of the governed and respects the indigenous power from which it was formed, that surrogate power can be useful.  The moment surrogate power assumes the rights of indigenous power corruption will begin.  Usually this is implemented by the use of force, mandatory conformity, suppression of rights, and dishonesty.  Surrogate power always draws its energy from indigenous power.  When this role is respected and openly acknowledged, surrogate power can be an effective extension of authority.  Although, if force and dishonesty have reversed priorities to give the false impression that surrogate power is real power, you then have a situation where the flea is trying to own the dog, and enforcing its claim with threats and punishment.

“Under such oppressive conditions, nothing works better than a Declaration of Sovereign Rights held by Indigenous Power.  That is the power of all true liberators.  It’s what the Founding Fathers of your nation did in 1776.  It’s what occurred with the abolition of slavery.  It has happened within communities, families, careers, and personal lives.  This is what happens when a person returns to the heart and activates the indigenous power established there by the Creator.  Sometimes surrogate power fights back, although it never wins.  For it has no authority of its own.”

Glenda Green is one of my esteemed teachers.  In her classes, she would change from her sixties (at the time) to a beautiful young woman, and back again before our eyes.  Her book quoted above is one of the best on earth.  You can purchase it here:  https://inspiredorigination.com/shop/love-without-end-jesus-speaks-2/ 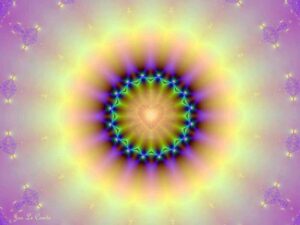