Health problems and diseases are proliferating, and being caused and aggravated by, non-native (unnatural) electromagnetic frequencies that we are now immersed in, daily.  Americans are not being informed about the rapidly growing toll on our health and the destructive effects of electromagnetic fields (EMF), and electromagnetic radiation (EMR), and radiofrequency radiation (RFR) in our everyday lives.  In the last 30 years, electrical / radio / magnetic pollution has increased by 1012, or 1 Trillion times.

As a result, growing numbers of people are needlessly suffering, and a great toll is taken on the natural world around us, while plans are concocted by a few senseless and unqualified profiteers for the future of the People.  Now, in 2020, the situation is becoming dire.  Check my notes on Attorney Dafna Tachover’s presentation in December 2018, for an overview and timeline of progression toward 5G, fifth generation wireless technology, that is BEYOND TOXIC in its potential destruction to people and nature. 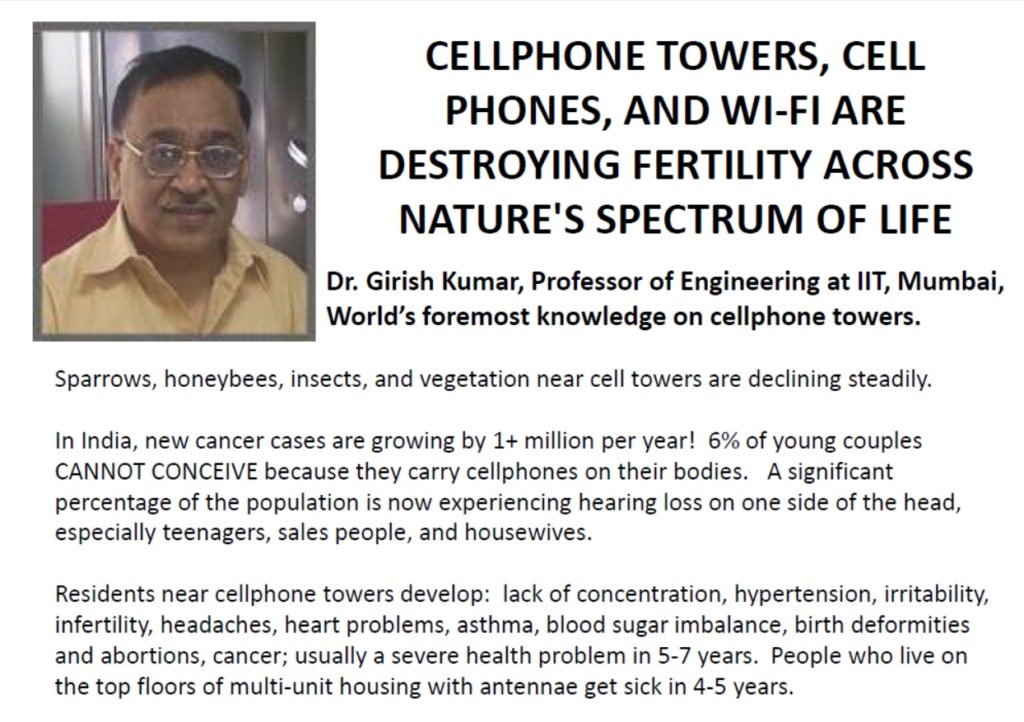 India’s problem is greater now because regulation of cellphone tower power density is LOWER than in the United States. Also, their population is very congested and everybody has a smart phone, which compounds the problem.

Dafna says, 25 percent of our population aged 13 thru 18 now have anxiety due to EMR.  20-30% of people who are sick are suffering from EHS.

Dr. Zach Bush says, 25 percent of girls age 12 in the United States today, already have antibodies to their own thyroid glands, due to the increasingly invasive cellular signalling confusion in our bodies from EMF and EMR.

Studies around the world HAVE PROVEN the harmful effects of EMF/EMR, but the truth is repressed in America by federal agencies bought and captured by corporate interests to further their agendas. 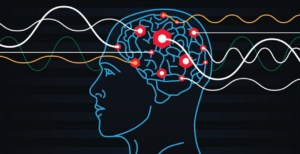 But now the Age is Turning, and many who have dedicated their lives long-term to bringing forward real science and informing the public are finally being heard!  We must become aware of the dangers and become cognizant of our environments.  We must halt 5G proliferation, before we do further harm to our bodies and souls from ignorance and loss of natural senses.  Our very orientation with reality on Earth is at stake.

Increasingly, the electric, radio, and magnetic intensity of our artificial environments is causing people to be afflicted with such problems as:

His 90-page document is one of the best summaries of current available science on EMFs, backed with a very strong argument describing the mechanisms of harm, biophysics, and why 5G is inherently dangerous to human health and life.  Just reading the summary can help you understand why many of us are very engaged in halting this untested technology before it accelerates self-destruction in unwitting communities.

For a good overview of the 5G problem, here is the Environmental Health Trust 5G information page.

EMF pollution is also causing bee colony collapse, bird deaths and disruption of migration patterns, tree diseases, more toxic mold growth, inflammation, and is contributing to the danger from super bugs that do not respond to antibiotics.

This article lists studies that have been conducted on insects, birds, animals, trees, amphibians, etc., to show the effects on NATURE.  By now it is strongly suspected that the sudden loss of 60 percent of insects we are just realizing is due to the cellphone towers and wi-fi we already have, before 5G is implemented and activated.

Effects of RFR Exposure on Birds and Insects, “How 5G Will Kill Birds, Bees, and Your Loved Ones, by American Intelligence Media.

Here is an excerpt from an article at “Prepare for Change“, which lists results of studies conducted in several nations:

Educate yourself and be proactive to eliminate or minimize wireless technology in your life, to take care of your body.  Become aware of the electrical currents around you, and especially cellphone towers!  Get an EMF meter and check your home for electronic/magnetic / radio hotspots and intrusions.  I highly recommend Electricsense.com as an information source, and for pioneering solutions internationally about this issue.

Limit your Screen Time with electronic devices!  Adults and especially, children, are developing disorders from too much screen time, which throws off the body’s natural cycles, disrupts sleep, distorts attention, irritates eyes, and overstimulates nervous systems.

Read the Petition to the United Nations from 26,000 Scientists for a good overview summary of this issue that would affect the balance of life and nature on our planet Earth

Below are links to STUDIES that prove the detrimental health effects from cellphone and wireless technologies as they currently exist, before implementation of 5G:

“Since 1984, it has been known that verapamil, the blocker of VGCCs, inhibits influenza A virus (IAV) infection [7]. Moreover, IAV infection induces Ca2+ influx, and the elevated intracellular Ca2+
promotes endocytic uptake of IAV [8]….”a VGCC blocker, diltiazem, significantly prolonged the survival of IAV-infected mice and allowed the recovery of the survivors.”

“the VGCCs blockers are excellent candidates for broad-spectrum anti-virus treatment…modulators for host calcium channels are the pots of gold for antiviral drug development”  “The disturbance of the host Ca2+ system by virus may suppress T-cell responsiveness, antiapoptotic, and other protentional functions.”

Send me an email if you would like a copies of these two studies.

Dr. Heuser conducted a SPECT brain study on firefighters in 2004 who complained of neurological problems following a cell tower installation at their firestation, which found that they were abnormal.  Symptoms they experienced:  headaches, memory problems, sleeping problems, depression, and anxiety.

A report published in 2015 in the journal Neuro-Oncology finds that gliomas are the most common cause of cancer-related deaths in adolescents and young adults aged 15-39 and the most common cancer occurring among 15-19 year olds  (see p. 18 of study here.

GBM has increased according to studies from around the world, with the highest increases in the frontal and temporal lobes  https://www.saferemr.com/search?q=glioblastoma

Number 1 – The US government National Toxicology Program’s $30 million study showed that 3% of rats that were exposed to cell phone radiation developed gliomas, whereas rats that were not exposed did NOT develop gliomas. The rats also developed malignant Schwannomas.  Results were statistically significant – it’s preliminary May 2016 report here http://biorxiv.org/content/early/2016/05/26/055699.full.pdf+html

In November 2018, the NTP published its cell phone safety sheet based on its study.  It states: https://www.niehs.nih.gov/health/materials/cell_phone_radiofrequency_radiation_studies_508.pdf

Overall, evidence from in vivo and in vitro and epidemiological studies suggests an association between RF-EMF exposure and either myelin deterioration or a direct impact on neuronal conduction, which may account for many electrohypersensitivity symptoms. The most vulnerable are likely to be those in utero through to at least mid-teen years, as well as ill and elderly individuals.”

This is a case study of a Colorado woman who experienced a return of her demyelination symptoms (seizures, vertigo, headaches, sleeping problems) following exposure to her neighbor’s (Xfinity) Home Wi-Fi Modem with Public Hotspot in August 2014.

After her neighbor replaced the modem with one without the hotspot feature, the seizures stopped immediately, and the other symptoms faded gradually, after which she was fine and again could sleep well. Later, when another neighbor obtained the same modem with activated hotspot, her symptoms returned.

A possible association between electrohypersensitivity, myelin integrity and exposure to low-intensity radiofrequency electromagnetic fields (RF-EMF) has recently been proposed.  Since the West Nile Virus attacks both the nerve cells and the glial ones, one explanation to the above observed case effects is that the initial virus attack and the wireless modem’s RF-EMF affect the nervous system through the very same, or similar, avenues, and maybe both via the oligodendrocytes.  Full Text:  https://comitatotutelamonteporziocatone.files.wordpress.com/2016/09/johansson-redmayne-2016.pdf

“NY Times” Best Selling Author, Elana Amsterdam from Colorado shares a similar story — how high levels of wireless EMF in her ‘smart’ home triggered a recurrence of her Multiple Sclerosis symptoms in 2014.  https://elanaspantry.com/green-house-almost-killed/

She was diagnosed with MS in 2006 and was able to keep it under control with a healthy Paleo diet.  After moving into her new ‘smart’ home in 2014, her MS returned, and she ended up in the hospital, numb from the neck down.  She wasn’t recovering despite her best efforts.  In 2016, after doing research on the health effects of wireless radiation and making the connection that wireless radiation was causing her symptoms, she removed all wireless technology from her home and is now on the road to recovery.

In a study done in England looking at GBMs from 1995-2015   https://www.hindawi.com/journals/jeph/2018/7910754/ frontal lobe GBM increased from 533 to 1231, statistically significant increase in primary GBM tumours were seen, especially in frontal and temporal lobes of the brain, temporal lobe GBM increased from 334 to 994.  The increase was attributed to an environmental factor. 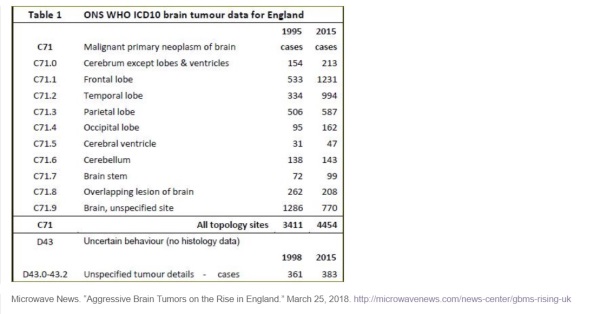 Risk of glioma from cell phone and cordless phone use

In 2017, British scientists showed after LDI treatment, calcium uptake into certain white blood cells is reduced, which may be the mechanism by which LDI works to reduce allergic reactions. In a study of 47 people, calcium levels in their blood cells were tested before and after exposure to electromagnetic fields.   Download the full text of the study:  https://www.degruyter.com/downloadpdf/j/jcim.ahead-of-print/jcim-2017-0156/jcim-2017-0156.pdf

Article on this study https://sciencediscoveries.degruyter.com/everyday-electric-field-exposure-increased-sensitivity-allergens/

Senior author Dr. Jean Monro, the Medical Director of the Breakspear Clinic in Hemel Hempstead, UK, explained their findings: “We found that exposure to everyday electric fields worsened the effect of allergens on calcium levels in lymphocytes”. In other words, calcium uptake into these cells was increased by electromagnetic exposure, but with low dose immunotherapy the levels of calcium influx were significantly reduced.

Lymphocytes are white blood cells that play a crucial role in the body’s immune system. Electric field exposure was found to be important in relation to several allergens, including formaldehyde, mercury, natural gas, nickel, nitrosamines, petrol/gas exhaust, salicylate, benzoate and metabisulfite. “Although we have found that low-dose immunotherapy can be an effective treatment for allergies, our most recent study suggests that patients may experience increased sensitivity to allergens as a result of exposure to everyday electric fields. These can be reduced by low-dose immunotherapy”.

The molecular mechanism involved relates to a theory by Professor Martin Pall, of Washington State University, in which he states that electromagnetic fields activate special calcium channels (VGCC’s) in cells, which then increases intracellular calcium. Following LDI treatment, the effect of sensitization to allergens by electromagnetic fields was reduced, therefore the authors state that low-dose immunotherapy is a successful treatment.

Read Dr. Pall’s paper that explains how calcium channels in cells are activated by EMFs: Electromagnetic fields act via activation of voltage-gated calcium channels to produce beneficial or adverse effects

Increased sensitivity to allergens/allergies, which manifest as increased respiratory allergies or skin rashes, is one symptom of EHS, aka electromagnetic sensitivity. (The 2016 Guideline used in Europe to diagnose and treat EMF-related health problems is attached.)

For nitrosamines, After LDI treatment, the calcium levels with EMF exposure (green line) decrease, and are lower than what they were without EMF exposure before treatment.

However for nickel, although the calcium level drops after LDI treatment with EMF exposure and without EMF exposure,

With EMF exposure (green line), even after LDI treatment, the intracellular concentration of calcium (171) is higher than it is in the case of no exposure before treatment (152). 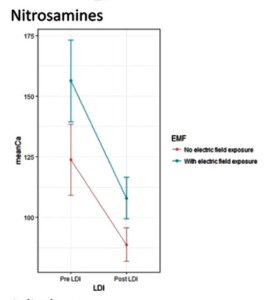 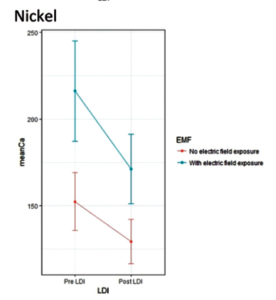 A sentinel case series of cancer patients with occupational exposures to electromagnetic non-ionizing radiation and other agents, 2011, Israel

Here are graphics illustrating What Cellphone Coverage in our Large Cities looks like.

Here is an excellent site with info about EMF exposures in, and solutions for your home.

Join my 5G Facebook Group to keep up with the latest info.