Wireless radiation has been found to affect not only humans and animals, but insects, plants and bacteria as well.

In addition, prolonged wireless radiation exposure (after 8 hours) has been found to confer antibiotic resistance  to bacteria that are pathogenic to humans, such as those causing pneumonia, meningitis, gangrene, sepsis/septicemia, wound infections, abscesses, eye infections, and food poisoning.  Antibiotic resistant bacteria has become a significant problem affecting public health:

Antibiotic resistance is rising to dangerously high levels in all parts of the world. New resistance mechanisms are emerging and spreading globally, threatening our ability to treat common infectious diseases. A growing list of infections – such as pneumonia, tuberculosis, blood poisoning, gonorrhea, and food borne diseases – are becoming harder, and sometimes impossible, to treat as antibiotics become less effective.   We are heading for a post-antibiotic era, in which common infections and minor injuries can once again kill.

“[M]ultidrug-resistant Staphylococcus aureus, caused more than 11,000 deaths in the United States in 2011 alone, and that one plus other resistant microbes kill hundreds of thousands of people annually around the world.” 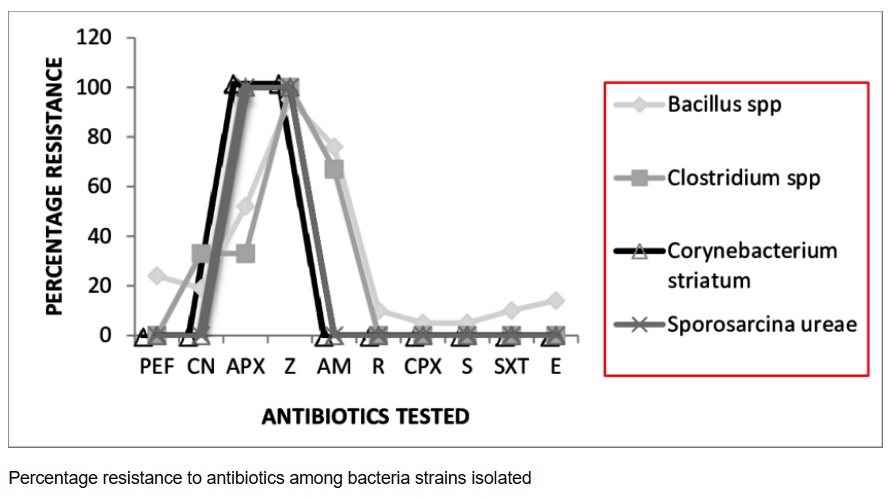 From the study by Elijah Adebayo

Wireless radiation  increases DNA damage in bacteria, but rod-shaped, spore-forming bacteria are more resistant to DNA damage; this skews bacterial diversity near high wireless radiation sources such as cell towers (i.e. rod-shaped, spore forming bacteria are found in disproportionately higher numbers near sources of high wireless radiation; in one study 89% of the bacteria present near cell phone towers was composed of human pathogenic bacteria that is associated with gangrene, food poisoning, sepsis, and wound infections).

Therefore chronic wireless radiation exposure, such as from cell towers, Wi-Fi, and cell phones, may be contributing to antibiotic resistance in bacteria as well as recurring bacterial infections.

Radiation from a cell tower reduced populations of bacteria that are gram negative, non-spore forming, or non-rod shaped and increased populations of gram positive, spore forming, rod-shaped bacteria while making them resistant to antibiotics.  In the soil within 100 ft of three cell towers (where the RF radiation emissions would be very high), 78% of the bacteria present was Bacillus spp and 11% was Clostridium spp, both of which are pathogenic to humans, and are gram positive, spore forming, rod-shaped bacteria.  Additionallly, beneficial groups of bacteria commonly encountered in the soil that contribute to sustainable plant growth were NOT found in the soil samples within 100 ft of the cell tower. “The depletion of such nitrogen fixing bacteria will likely lead to soil infertility…This may invariably lead to reduction in yield and productivity of food crops in such environment.”

“Bacillus and Clostridium have been reported as human pathogens. Bacillus circulans and Clostridium septicum have been associated with gas gangrene which is highly fatal and may result in death in less than 24 h … Clostridium septicum is highly pathogenic in immune-compromised individuals, Corynebacterium striatum have been implicated in endocarditis, bacteremia and catheter infections … Bacillus cereus causes food poisoning, diarrhea, severe nausea and vomiting …  Bacillus circulans is a pathogen incriminated in human infection such as septicemia, mixed abscesses and wound infection.”

Ten common antibiotics were used to test resistance in the bacteria from the soil samples within 100 ft of the cell tower, and Bacillus spp showed resistance to ALL (100%) antibiotics used, Clostridium spp was resistant to four (40 %).  Among the 27 species of bacteria present in the soil samples, 96% were resistant to zinnacef, 70% to amoxicillin, 56% to ampiclox, 19% to pefloxacin and gentamycin, 11% to erythromycin, 7% to rocephin and septrin and 4% to streptomycin and ciprofloxacin.

Greater antibiotic resistance was observed in microbes present in soil near mobile phone base stations compared to control. A statistically significant difference (p<0.05) in pattern of antibiotic resistance was found with Nalidixic acid and cefixime. “[M]obile tower radiations can significantly alter the vital systems in microbes and turn them multi-drug resistant (MDR) which is most important current threat to public health.”

Bacteria responsible for pneumonia became antibiotic resistant after 8 hr exposure to Wi-Fi.  However up to 4.5 hours of exposure, the bacteria was more susceptible to antibiotics than the control bacteria (bacteria that was not exposed).

Exposure to 900 MHz GSM mobile phone radiation and 2.4 GHz Wi-Fi radiofrequency radiation emitted from common Wi-Fi routers alters the susceptibility of microorganisms to different antibiotics. The pure cultures of Listeria monocytogenes and Escherichia coli were exposed to RF-EMFs generated either by a GSM 900 MHz mobile phone simulator and a common 2.4 GHz Wi-Fi router. It is also shown that exposure to RF-EMFs within a narrow level of irradiation (an exposure window) makes microorganisms resistant to antibiotics. This adaptive phenomenon and its potential threats to human health should be further investigated in future experiments. Altogether, the findings of this study showed that exposure to Wi-Fi and RF simulator radiation can significantly alter the inhibition zone diameters and growth rate for L monocytogenes and E coli. These findings may have implications for the management of serious infectious diseases.

“Human microbiota, including skin microbiota, has been linked to a very significant role in the health of a host human body. It is important to understand the response of human skin microbiota to the RF-EMF from cell phones and personal electronic devices, since this may be one of the potential mechanisms of a human health threat brought about by the disruption of the intimate and balanced host-microbiota relationship. Here, we investigated the response of both laboratory culture strains and isolates of skin bacteria under static magnetic field (SMF) and RF-EMF. The growth patterns of laboratory cultures of Escherichia coli, Pseudomonas aeruginosa, and Staphylococcus epidermidis under SMF were variable per different species. The bacterial isolates of skin microbiota from 4 subjects with different cell phone usage history also showed inconsistent growth responses. These findings led us to hypothesize that cell phone level RF-EMF disrupts human skin microbiota. ”